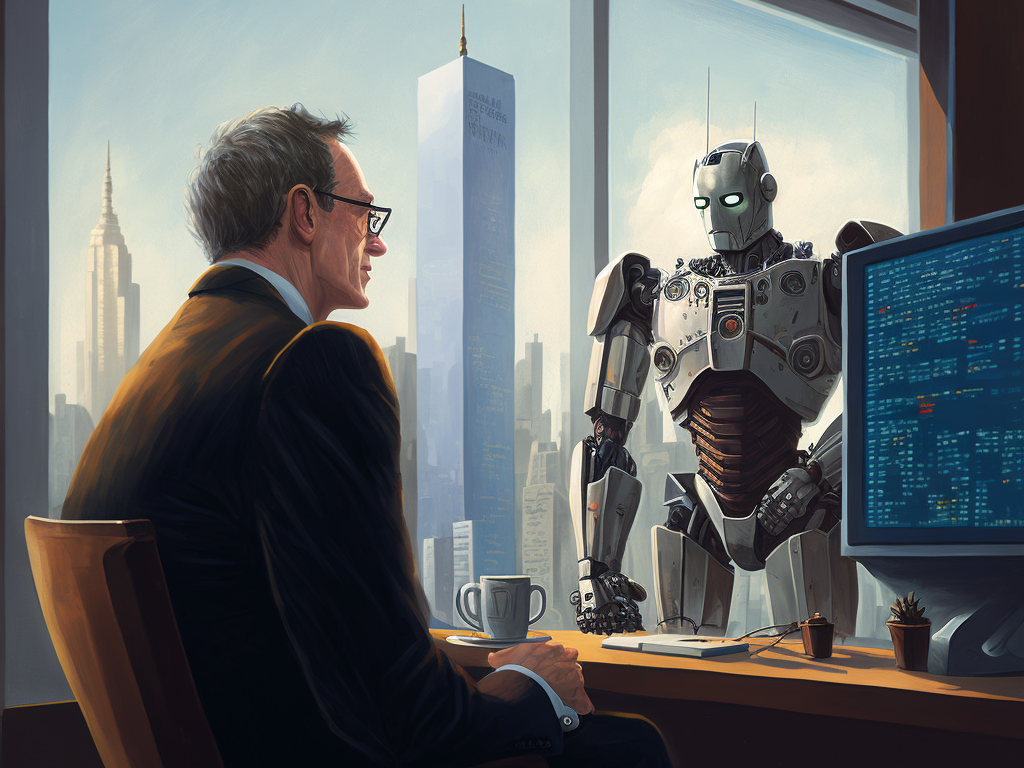 Only just released, ChatGPT has taken the internet by storm and drawn attention to a new breed of software writing computer codes and poems or draw cartoons.

The next Google, Wikipedia, Bitcoin..?

Crypto bros may resent the thought, but Elon Musk knew it all along: Attention is the only real currency on the internet. Measured in units of it, and we believe that Google Trends is still a good proxy, Chat GPT has indeed taken the world by storm. Only weeks following its release, the generative AI software is more popular than the world's best automatic translation software, DeepL, after years of operation. It lets Stack Overflow look like a dubious and potentially redundant corner for nerds and may soon overtake Wikipedia, the incumbent store of knowledge and first contact for questions of all kinds - the guardian angel who saved us from many hour-long fruitless discussions with friends and family.

The broad knowledge of Wikipedia, the coding know-how found in millions of Stack Overflow threads, the multilingualism of DeepL or Google Translate, and the disruptive potential that used to be attributed to the likes of Bitcoin and Tesla. Will ChatGPT, just valued at USD 29 billion by Microsoft, catch them all? Interestingly, while the first sentence of this article was a punch on the activity of mysterious bots around Tesla's stocks, Musk is indeed one of the backers of OpenAI. He started the San Francisco-based company together with Sam Altman and other investors who jointly committed up to one billion USD in 2015 with the aim to facilitate research in the vast field of artificial intelligence.

No worries, we won’t dive into its history or the nitty gritty details of Artificial Neural Networks and Reinforcement Learning here to explore what generative AIis and what it can or can not do. Let’s instead explore the field in collaboration with its currently dominant protagonist.

‍Hey Chat GPT, can you write us an introduction about yourself?

I am ChatGPT, a language model developed by OpenAI. I am trained on a large dataset of text and can generate human-like text in response to prompts given to me. I can be used for a variety of tasks such as answering questions, generating text, and more. I am a machine and do not have the ability to think, feel, or have consciousness like humans do. My knowledge is based on the data that I was trained on, which is limited to the information available up to 2021.

‍Excellent, can you write us an article about yourself, something a bit witty and critical?

Sure, here's an article about ChatGPT, the AI language model that's taking the world by storm:
Meet ChatGPT, the wunderkind of the AI world. With its impressive language capabilities and uncanny ability to generate human-like text, ChatGPT is quickly becoming the go-to choice for businesses and researchers alike. But beneath the shiny exterior, there's a lot more to this AI than meets the eye...

‍Whoa, can you tone it down a bit, give us something less boastful?‍

Sure, here's a different take on an article about ChatGPT:

ChatGPT is a language model developed by OpenAI. It is trained on a large dataset of text and can generate human-like text in response to prompts. It can be used for a variety of tasks such as answering questions...

‍Wait we heard this before but we asked you to write something witty and critical.‍

I apologize for the confusion. Here's a more witty and critical take on ChatGPT:

Introducing ChatGPT, the AI language model that's taking over the world - one boring business report at a time. Don't let its impressive language capabilities fool you, this machine is nothing more than a sophisticated parrot, regurgitating information it's been fed. But hey, at least it doesn't need a cracker to perform. Despite its lack of consciousness or true understanding, ChatGPT is a useful tool for those looking to save time and energy on writing tasks. Just don't expect it to have an original thought or spark of creativity. It's a machine, after all.

Obviously, any examples are, by definition, limited in scope, and at the end of the day, the quality of generative AI's output, like that of many pieces of software, depends a lot on the user's sophistication. However, this brief exchange nicely indicates some of ChatGPT's built-in strengths and weaknesses.
ChatGPT produces "text based on the probabilities of certain words or sequences of words appearing together, based on given training data" scraped from the internet. This allows it to deliver well-formulated descriptive texts on diverse topics in various languages and styles. The software also memorizes prior exchanges of up to 4000 tokens or roughly 3000 words (probably more than most humans), enabling it to entertain evolving "conversations" with its user. It is definitely useful for marketers having to quickly fill more or less generic websites and brochures as well as for developers of curricula at schools and universities. As our experiment shows, the variety of responses to different questions is limited, though. Students and ghostwriters, looking forward to having their (home)work done by the AI may sooner or later end up facing plagiarism questions and limitations of the training data (information, publicly available on the internet) limit its applicability to specific problems (how to write a marketing text on the first iPhone when the training data only comprises input from Nokia?).

Broadly speaking, the content generated by the AI, even when delivered in a humoresque style, is a recompilation of pre-existing snippets of information available in the dataset fed to the computer. It's thus not surprising that texts generated tend to read like an intern's first project: Factually correct and accurate but purely descriptive with limited use beyond educational purposes.
We can illustrate this through another brief exchange with the algorithm:

‍ChatGPT, do you think, the Fed will become more accommodating this year as inflation is receding?‍

As a language model, I do not have personal opinions or the ability to predict future events such as the Federal Reserve's monetary policy...

Is now the right time to overweight stocks?‍

As a language model, I do not have the ability to predict future market movements or provide financial advice

...
additionally, it's important to remember that investing in the stock market comes with risk, and you should be prepared for the possibility of losing money.

While the second response may be good news for analysts and strategists worried about their jobs, it shouldn't serve as mockery here because it demonstrates an important aspect that sets ChatGPT apart from earlier language models and makes it way more helpful.
Some readers may remember Microsoft's experiment with a chatbot on Twitter that soon turned into a racist monster spitting out swearwords and conspiracy theories. OpenAI has apparently done an excellent job of using reinforcement learning (basically a human regularly giving feedback to the machine during the training process) to make the software less aggressive and remove biases found in the dataset. In other words, instead of coming up with all kinds of unreliable theories about the stock market, at least as of today, the AI reverts to behaving more like a compliance manager.

A balanced view on the hype

Jokes aside, the new generation of generative AI has impressive capabilities going far beyond text generation. There is a good compilation of various AI-driven productivity boosters currently available here.
We tested ChatGPT's ability to write finance-related textbox-style abstracts and asked it questions on classical literature. Its views on Camus' The Stranger are significantly more sophisticated than what a bunch of Google Searches retrieved and the texts obtained were usually quite accurate, always polite, and if prompted, contained the weighing of different views and arguments. We also let it write Python, R, and SQL snippets and again obtained satisfying initial results; the software failed to develop our program (a trading strategy) any further, though.

The greatest rabbit hole, however, is another generative AI software, we tested, called Midjourney, a wonderful tool posing serious, anthropological questions about the nature of originality and creativity. It's not too surprising that software that systematically mixes and matches given information faces no difficulty coming up with Dali-style paintings but how many prompts would it take to go from a set of photos of real-life items to Warhol's Campbell Soup Cans?

In any case, the new generation of software is likely to change how people work, particularly in IT, marketing, and creative professions. As investors running the Quantamental Platform and generally interested in staying ahead of the curve and on top of the latest trends, we are already using it to support our processes when writing codes and scripts, interacting with our databases, or quantitatively analyzing time series.

However, as usual, the productivity improvements enabled by the new software are rather evolutionary than revolutionary. Beyond that, there are drawbacks, and we are not looking forward to another wave of repetitive and useless sales and marketing content in a world already awash with it. The confident tone with which bots can nowadays deliver nonsense, copyright, and plagiarism problems (tools to detect bot-written content are already available) as well as the lack of traceability of the sources of information are other obstacles users are confronted with.

Critical thinking, already challenged by Social Media's rise at the expense of traditional news outlets, will become even more crucial in the age of sophisticated machine-generated content, often indistinguishable from a human's work.

Coming back to the investment world, we see only limited applicability of standard programs like ChatGPT when it comes to fundamental market and equity research. Still, generative AI has shown what can be done with a dataset. We don't see why it shouldn't become possible to ask another AI to, for instance, highlight the most important information given during a company's earnings announcement or analyst meeting. These applications could go well beyond the kind of sentiment analysis currently available on analytics platforms and bring the research process to the next level.

Until then, we will continue to look out for new tools and methodologies to help our research and portfolio management and continue to regularly share what we see and think about the markets - hopefully always in the timely, creative, and inspiring manner required to maintain an edge over our digital competitor.

Happy 2023 and a good start in a hopefully more supportive market environment!