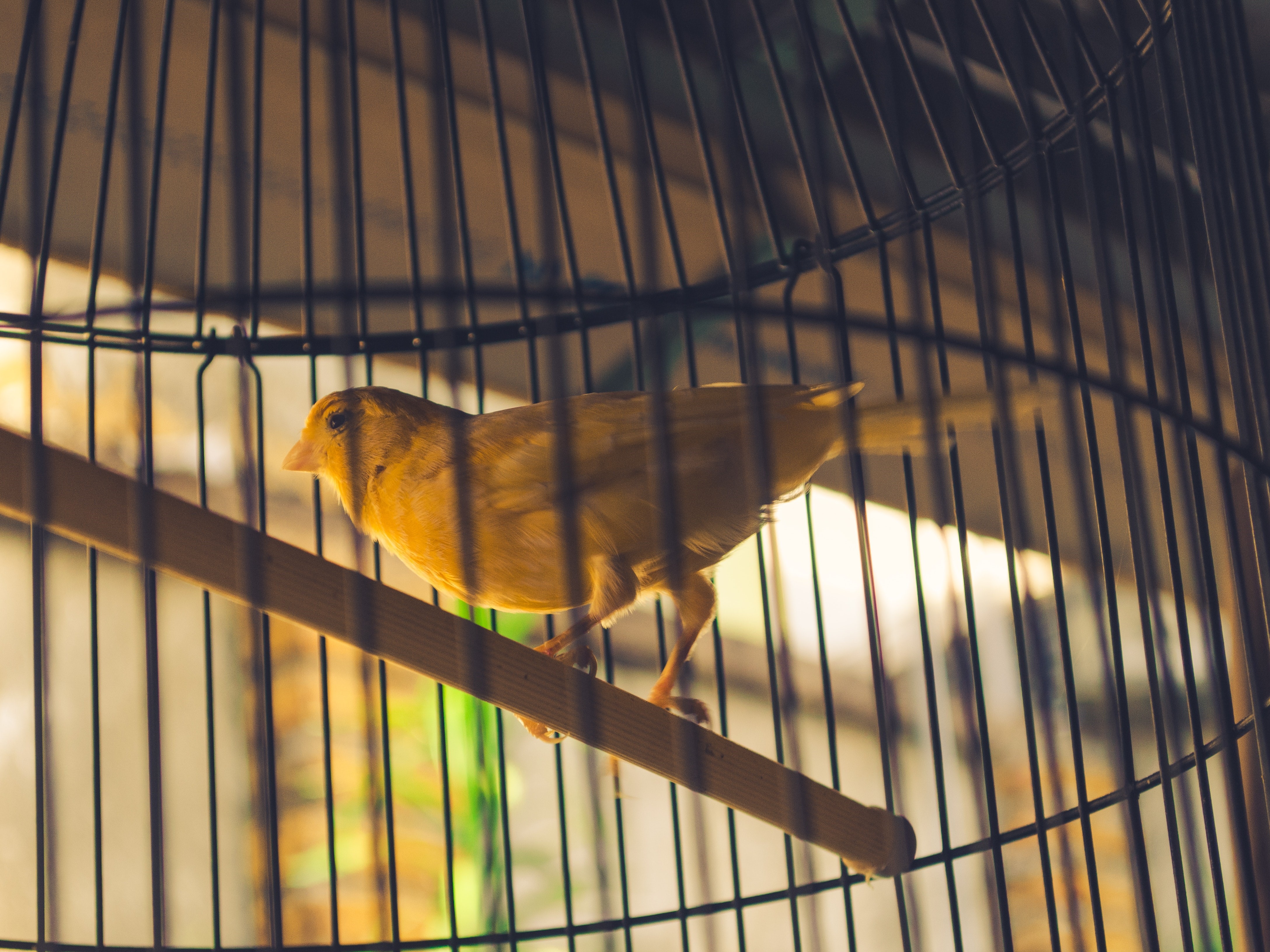 Don't save the canary. Fix the coal mine.

Corporate credit spreads, particularly those on high yield bonds, are closely watched indicators. Not surprisingly, the risk premium investors request for holding the debt of less reliable borrowers increases when uncertainty is on the rise. Highly indebted corporations are more likely to default during economic contractions and times of financial distress. Beyond that, tightening credit conditions during an economic crisis can become a self-fulfilling prophecy as rising rates and spreads can push corporations over the brink that would have survived otherwise.

This results in an asymmetric, option-like return profile for high yield debt. During calm periods, investors clip coupons and enjoy steady, positive returns. However, it is well understood that in the case of a default, equity is wiped out the creditors essentially become the business's new owners. Once this scenario becomes sufficiently likely, high yield bonds, therefore, tend to trade like equity, inducing a high correlation between equity and high yield markets during periods of distress.

Credit spreads, being the difference between the yield of a corporate bond and a save government bond, are inversely correlated to the bond's price. When default risks increase, and bond prices drop, spreads surge, logically resulting in a negative correlation between credit spreads and equities. However, beyond this straightforward relationship, many equity holders also monitor high yield bond markets to look for clues on the future path of equities. For decades, high yield bond markets have been dubbed the "canary in the coal mine" based on the idea that they react particularly sensitively to changes in the economic, monetary and market environment and thus a reliable indicator of market health.

However, this assumption essentially implies that high yield bonds price in new information faster than stocks. Are bondholders faster or better informed than equity investors, or are they more rational and less prone to ignore adverse developments?

In his famous book, Liar's Poker, Michael Lewis called "Equities in Dallas" the training program "burying that lowest form of human scum where it will never be seen again". In other words, fixed-income experts, looking down on the "storytellers" from the equity side, might be a common phenomenon in finance firms. Nevertheless, we were a bit suspicious of the "canary in the coal mine" theory and therefore decided to investigate the problem a bit further.

Who is leading whom?

A simple approach to analysing the information content of market indicators is the calculation of lead/lag relationships shown in the charts below. Here, we compared the total return of the S&P 500 Index and the change in the CSI Barclays High Yield Index. Our time series covers the time from January 1988 to February 2022, and we performed the analysis on a daily, weekly, monthly and quarterly basis. The y-axis shows the correlation coefficient and the 95% confidence interval. The x-axis denotes the number of lags induced to the x-variable. In other words, the y-value at x=-10 shows the correlation between the contemporaneous change in the high yield spread and the return of the S&P 500 10 periods earlier. As can be seen, there is a strong and statistically significant contemporaneous relationship between equity returns and changes in high yield spreads, regardless of the periodicity. The correlation coefficient increases with the length of the observation period, indicating a higher degree of noise in the short term.

What's interesting is that, indeed, there seems to be a lead/lag relationship in the short term. The first chart in the upper left indicates a significantly negative correlation between high yield spreads and 1 and 2 days lagged S&P 500 returns. However, this implies that day-to-day equity markets lead high yield markets, not the other way round. A weaker link persists even with weekly and monthly observation periods. Economically, there may be a good rationale for this observation. Corporate bond markets and high yield bonds, in particular, are infamously illiquid, and trading costs are higher than in equities. Therefore, it may take high yield bonds longer to adjust to market-wide shocks, and in the presence of higher transaction costs, we would expect fixed-income investors to have higher reaction thresholds in place.

Focus on the significant events

Obviously, average correlations don't tell the whole story, so we further studied the relationship between credit spreads and equity returns by focusing on major drawdowns. Below, we plotted major drawdowns in equity markets next to the inverted high yield spread widening. Indeed, there were some periods (1989, 2000) when high yield spreads rose and remained stubbornly elevated even when equities recovered. When equities finally corrected, they did so in lockstep with rising credit spreads. Nevertheless, the charts below indicate that investors were potentially able to reduce risk ahead of some significant corrections by staying away from the equity market when credit spreads remained elevated (1990, 2000).

However, the charts also clearly show that there has always been a lot of room for interpretation. In 1994, for instance, credit markets recovered while volatility in equities increased. During the burst of the Dotcom bubble, equities kept falling even when credit spreads stabilised and tightened again. The really painful part of the crash was hardly foreshadowed by rising spreads. More recent slumps in stocks, such as the corrections at the end of 2018 and in March 2020, came suddenly and were characterised by a well-synchronised correction in both asset classes.

Finally, we backtested some simple market timing strategies based on high yield spreads. The first chart shows the result of an algorithm that holds cash whenever high yield spreads rose on the previous trading day and holds the S&P 500 whenever spreads were stable or decreased previously. Obviously, this would have been a terrible strategy with large drawdowns and minimal returns, confirming the findings from our lead/lag correlation analysis. While there is a strong contemporaneous correlation between credit spreads and equities, spreads don't lead equities in the short term.

However, our event study showed that significant corrections in equities often occurred following persistent wobbles in the high yield market, characterised by high spreads over a more extended period. We, therefore, tested another strategy that simply leaves the equity market when spreads have risen above a pre-defined threshold and only re-enters the market once they have recovered sufficiently.

The problem with strategies like this is that the choice of the threshold heavily affects the strategy's performance and is effectively a judgement call. Investors may be tempted to choose thresholds that worked well in the past but won't deliver similar results in the future. Above, we tested two strategies, arbitrarily setting the spread widening threshold to 3% and 4%. Both systems helped investors avoid the Dotcom crash (but who can afford to stay on the sidelines for years while markets are running ever higher?) and the Great Financial Crisis and thus reduced maximum drawdown substantially. This looks good at first sight, but results have been less satisfying over the past decade.

Most importantly, during the March 2020 crash, investors following the 4% threshold would have left the market at the worst possible point in time and missed out on a large part of the recovery. Consequently, both strategies beat the market on a risk-adjusted basis (Sharpe ratio) over the entire period but underperformed since 2011 and had a terrible year in 2020.

The developers of quantitative market timing strategies love the Dotcom bubble and the Great Financial Crisis. With the benefit of hindsight, so many indicators anticipated the meltdown in equity markets back then. However, we wouldn't encourage investors to use these crises to calibrate their market timing strategies. The bunny market between 2015 and 2020 was dominated by V-Shaped recoveries favouring mean-reversion strategies and making risk-based tactics very costly. Finally, the Covid slump dramatically illustrated the danger of ill-times market timing (we wrote about an infamous example from the Robo-advisor space in this publication from March 2020).

Elevated high yield spreads are a sign of market instability, just like elevated volatility, but we find little evidence that they contain information on the future path of equity markets. In the short term, stocks seem to be more reactive to market-wide newsflow and lead credit spreads, not vice versa. Reducing risk exposure when credit spreads rise pushed investors out of the market too early during the Dotcom bubble, worked well during the Great Financial Crisis but has not generated superior risk-adjusted returns since then.

The "canary in the coal mine" dies too late and resurrects only when the miner is already working again.